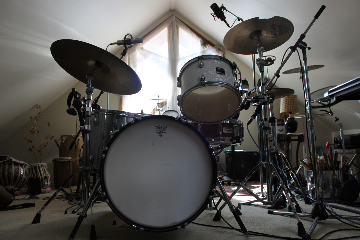 "I've recorded 2 full albums and several singles at Wayne Adams' studio.  I keep returning.  The sound is always first-rate, full, warm, and radio-quality, as evidenced by the numerous spins on CBC and national radio in the UK, Norway, Germany and Holland that those recordings have received.  But the most important reason I keep returning is Wayne Adams' talent behind the board.  He creates an atmosphere of relaxed creativity, and has a knack for making that perfect suggestion that takes a record to the next level.  His skills, knowledge, and the "vibe" he creates are what sets Wayne's studio apart."

"Wayne Adams is my first-call, above-all drummer, and the only drummer I record with.  Technically, Wayne has killer chops, and his versatility and sensitivity to the needs of the song are unmatched.  Not just a great drummer--also a great collaborator and contributor of artistic ideas."

"Wayne Adams is quite frankly one of the most talented, inspiring musicians and producers I’ve ever worked with. He has performed, recorded, edited and produced several of my albums overs the years including “Zolty Cracker”. He has an amazing studio brimming with all the essentials for a professional recording and is gifted with the uncanny ability of bringing out the best in those he works with.

As a percussionist Wayne has a Massive dynamic range that travels from “punk”, “world”, “folk”,“motorfolk”, “groove” and “rock”.

He is a genuine and passionate being and has been a vital part of my music for a better part of two decades. I tip Mon chapeau to the man.

I love creating and recording with Wayne and look forward to doing more together in the near future."

"Recording at Wayne's studio was a wonderful experience. His studio environment welcoming and comfortable. Wayne is versatile and skilled in every area of the recording process. This was my first full length CD and I felt really encouraged and supported throughout the entire process."

"When I first entered the studio I sensed a throw back to Vancouver's indie music scene. Surrounded by a plethora of instruments,  a quick tour of the gear showed an expertly set-up and well equipped modern day studio. Cosey seating and lemon balm tea from the garden helped make the studio a comfortable, creative environment.

Wayne brings deep roots in the Vancouver music scene, and a long, continuing, history of touring nationally and internationally. The value of his ears, great sense of timing, and playing ability can not be overestimated. When a certain kind of sound/player is needed for a track, he seems to have a deep catalogue of musicians to call on. He even conjured up the infamous Roc Lamond for one of our sessions.

The studio was very flexible in working with my very irregular schedule. Originally I went to do three tracks. We ended up with 11 tracks. Over the time and distances between start and finish, Wayne never lost track of, nor enthusiasm for, the project.

Despite, or maybe because of, his experience, Wayne approaches artists and music from all walks with respect. He exudes a curiousity/drive towards what musical marvels can come out of every and any session. It seems to me, he just loves creating music."